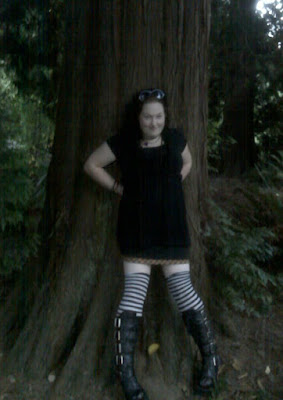 Chris took this picture for me at Kelsey Creek Park :)

So.. in newer news! Oh my. I can only hope this will last! I found a male species that actually really, really likes cuddling! You heard it right. Turns out to be one of my tickling contacts I had met about a year ago from our munches. He had found a girlfriend shortly after we had gone on a few casual dates back at that time, so I had obviously lost hope when he stopped attending meetings with us downtown. Well, it turned out working quite well actually, because his girlfriend apparently broke up with him recently.. and he saw one of my many pathetic status messages on yahoo last night asking for a date. We went to a midnight showing of "Return to Oz" and then got some late night grub at the new diner that replaced beloved Ol' Minnies. (where the fuck else could you get a half pound of clams at 3am for a mere 8 dollars?) I was sad to see this place go. But anyways! Lordy, this guy was into snuggles. We both tickled each other and did a lot of soft touching and then he just squeezed me. Kept holding tighter... we fell asleep that way about 4am in the morning until 2pm the next day in our underclothes. It was absolutely superb. Sensuality does exist among men! <3 Mmm.

In other news I am indeed going to the Folsom street Fair next weekend for kink and other random goodness down in sexy San Fran. I will get to see my "roleplay" incest daddy Lokesh, and Mike and fat lil' Bucky too! I <3 San Francisco
Posted by JulieTiger at 3:15 PM